HomeMaking of'sThe making of ‘Throne of the Burlesque’

The making of ‘Throne of the Burlesque’

Andrew Blackman shows how he was making his ‘Throne of the Burlesque’
The first step, as with any of my paintings starts with an idea and a sketchpad. When looking for a concept I decided that it was time to give an old character of mine an update. The very first thing that fell into place in my mind was the lighting. I wanted it to come from above. The tone of the lighting is very interesting in this case because it determines the mood. If the lighting had been warm toned it would have given the piece a more angelic, heavenly affect, however I intentionally chose a cold blue so it would be much more sinister.

Before I start an actual sketch that will be used for the basis of the painting I like to very roughly and loosely try to get my idea onto paper. 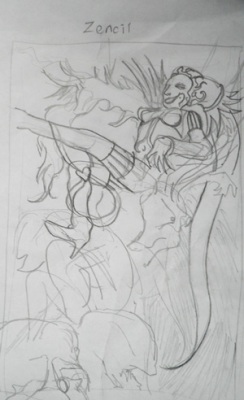 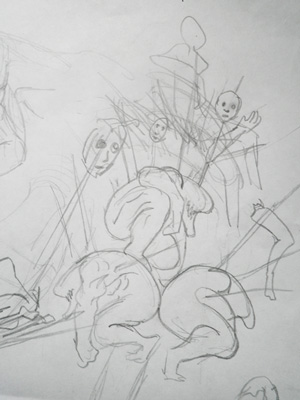 It’s not very detailed or accurate, but for me it’s enough to work out a composition that I like. I knew I wanted to paint Zencii (the main character) but I didn’t want to simply paint her by herself as the sole object of interest in the piece. (I had done this already in a previous painting) so I decided I wanted to make a larger, more involved painting that leads the eyes from the top to the bottom creating a very unique throne filled with lots of symbolism and meaning that I’ll leave up to the viewer to digest.
After deciding that I liked the feel of the composition I started sketching. For this I used no references, trusting that my knowledge of anatomy would be enough. (Usually any corrections can be made at a later stage anyway, so I don’t try too hard to be completely accurate here) Drawing extreme musculature is new to me so it was a challenge I relished. Overall with sketching I worried less about detail and more about the overall figures and their placement within the image. 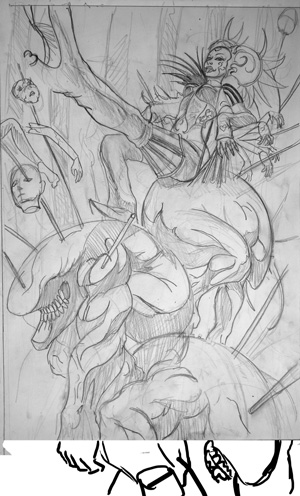 As you can see I ran out of space at the bottom of the page but instead of letting the image finish there I decided that it would benefit from adding a little more which I did using Photoshop and a few quick lines.

brush2
I decided to render in grayscale first since this was from the beginning intended as an image of high, stark contrast. Grayscale allows me to focus entirely on levels without being distracted by colours. 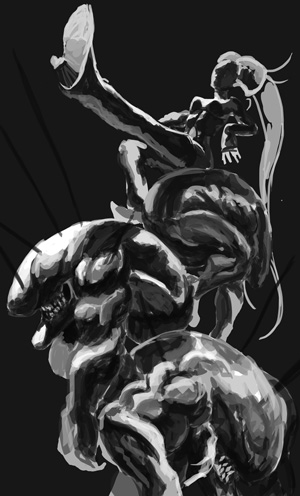 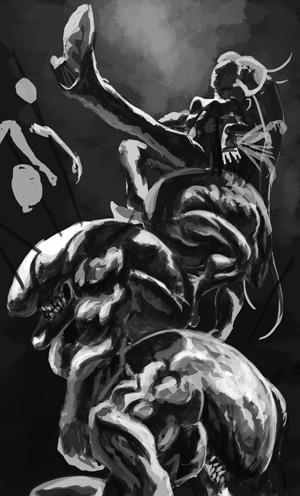 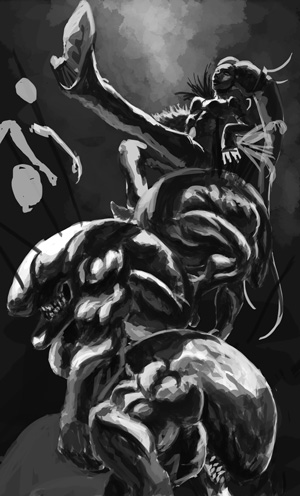 Here I was able to work out a lighting scheme I felt would be striking and fit the mood I was trying to convey while working out the overall levels. Around this time it occurred to me that her feet looked pretty silly and awkward, and I’d have to find an alternate placing for them. After messing around and experimenting a bit I came upon an arrangement of her feet that looked more natural and suited her personality. I also had to shift some stuff around to make the perspective work, and I added a fourth figure to the bottom left of the image to fill up space. 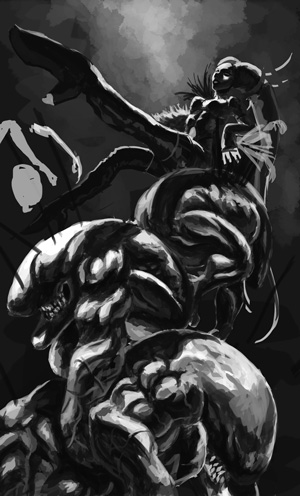 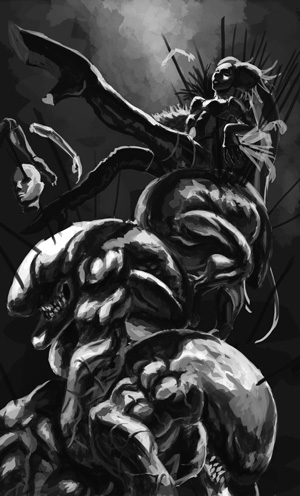 I also sketched in details like the spikes jutting out of the statues and the doll/mannequin body parts. Before advancing to colour I wanted to be sure that I was satisfied with the levels and intensity of the lighting. A good way to do this is to zoom out so you can observe the painting from afar. I think it’s important that you can at least make out important details of a painting while it’s no bigger than your thumb. I like to use the navigator and have it up at all times while painting. That way I can see the image small in the navigator box and paint in real time on the actual image. It’s an extremely helpful tool.

Adding colours is pretty easy. I made a separate layer set to multiply and layered the desired colours on top. Then I merged the multiply and original grayscale layer together and painted on top as normal. 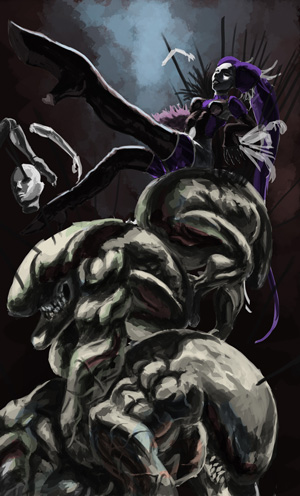 Of course the lighting suffers because multiply eliminates whites but these can be re-added in the rendering stage. Firstly I focused on the texture of the statues. For this I looked online at pics of stone statues to get a feel for their colour schemes and textures. I decided I wanted the rendering to be fairly tight and intensive instead of loose and impressionistic. After defining the shapes with brush 1 I moved onto brush 3 that I felt would be good at conveying stone. Using low opacities (from 5-20%) I painstakingly worked on the texture to try for a stone feel. Beyond the texture I added different tones of greens, browns, blues and yellows to give it an organic, dirty and realistic feel. 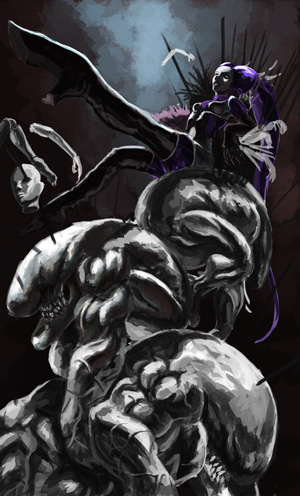 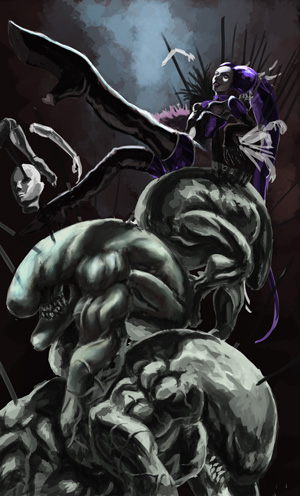 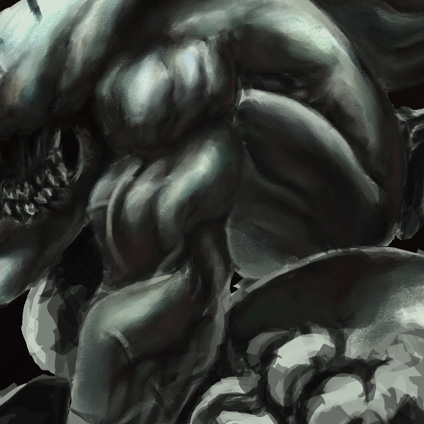 For highlights I decided to experiment by making an overlay layer. (Something I had only done in a very limited capacity in previous pieces) with this layer I used a light blue and went over the lighted colours of the piece. I also added a background. 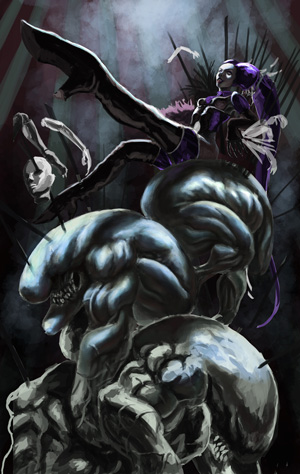 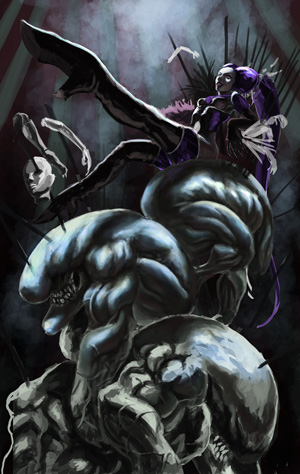 I was extremely pleased with how this turned out. The blue tones were very vibrant. To complement this I added a little brown and red to the shadows which gave a nice contrast. I considered making them more intense by adding a second light source from the bottom of the image but decided against this as I wanted the piece to be very dark with limited light to suit the mood I was going for.

From this point on it was all simple detailing. Defining what had already been rendered. Zencii’s body had to be adjusted several times to make the anatomy more correct. I usually do this by using the lasso tool to select certain portions and resizing or moving them. Rendering Zencii is always fun because her outfit has so many different surfaces. I coloured her with basic tones then used the overlay layer to add the blue tones to the highlights. I did the same for the various mannequin parts and stakes. 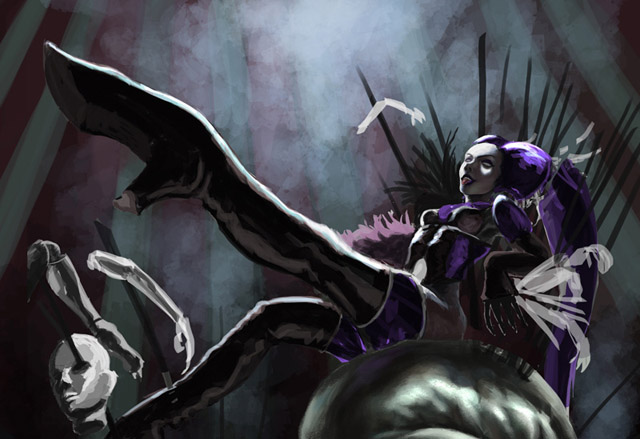 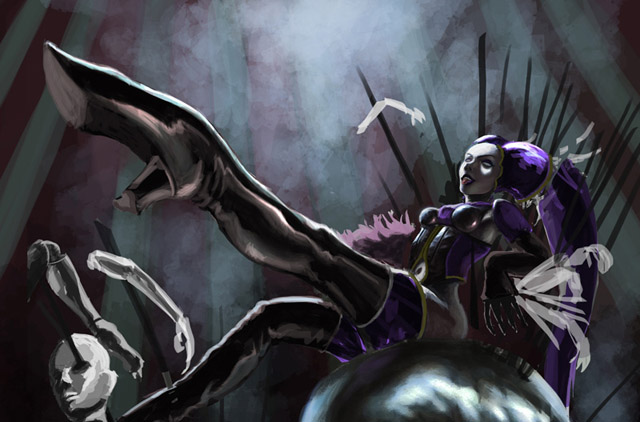 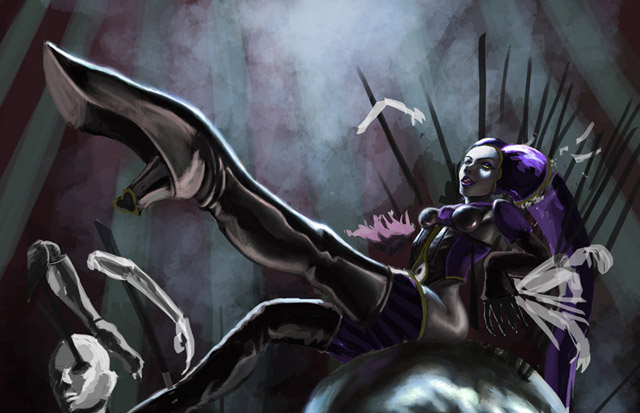 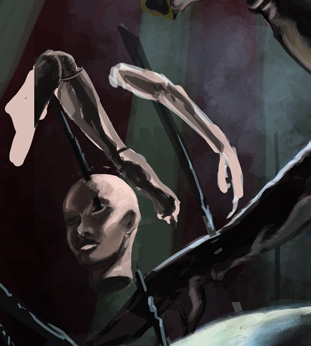 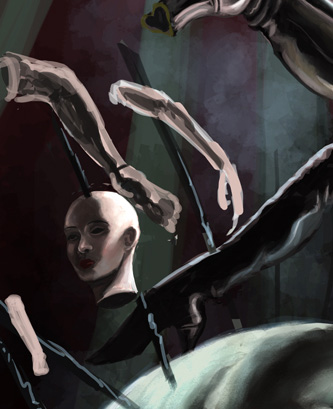 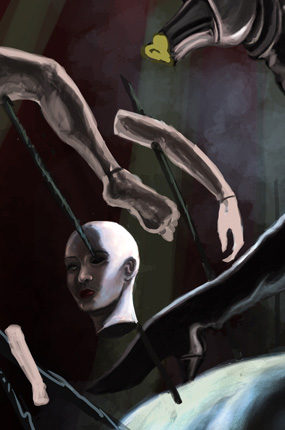 I tried adding a Gaussian blur to the ambient smoke and background and found that I liked how sharp it made the foreground image look in comparison. 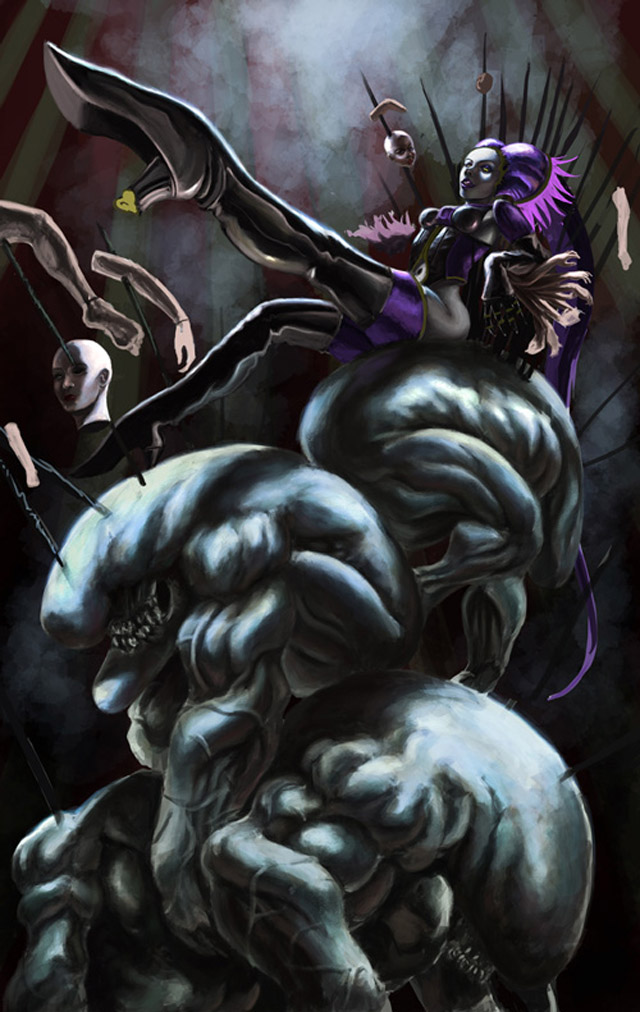 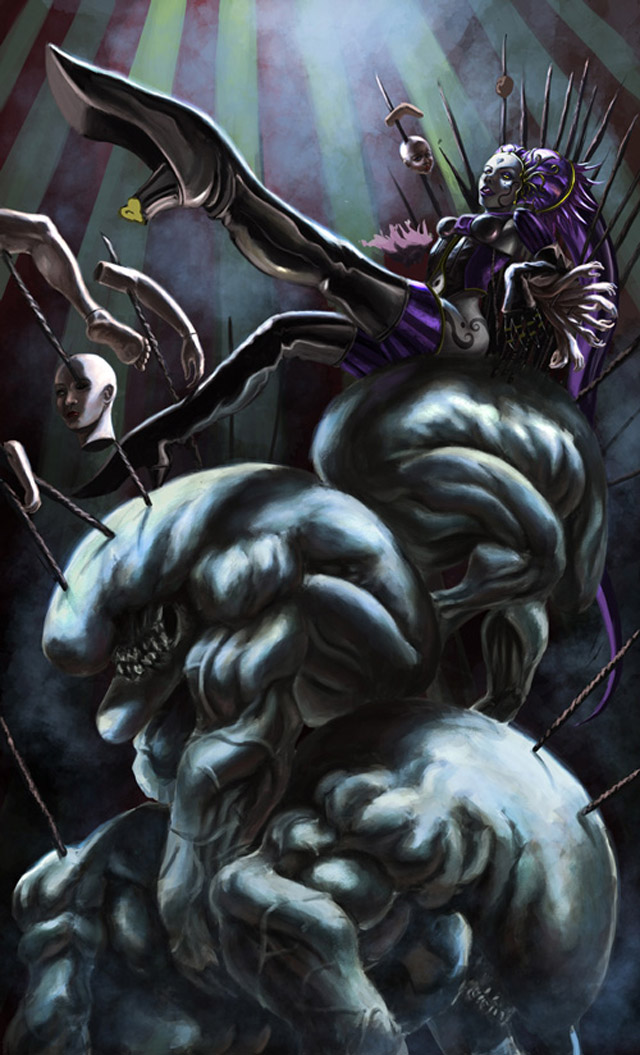 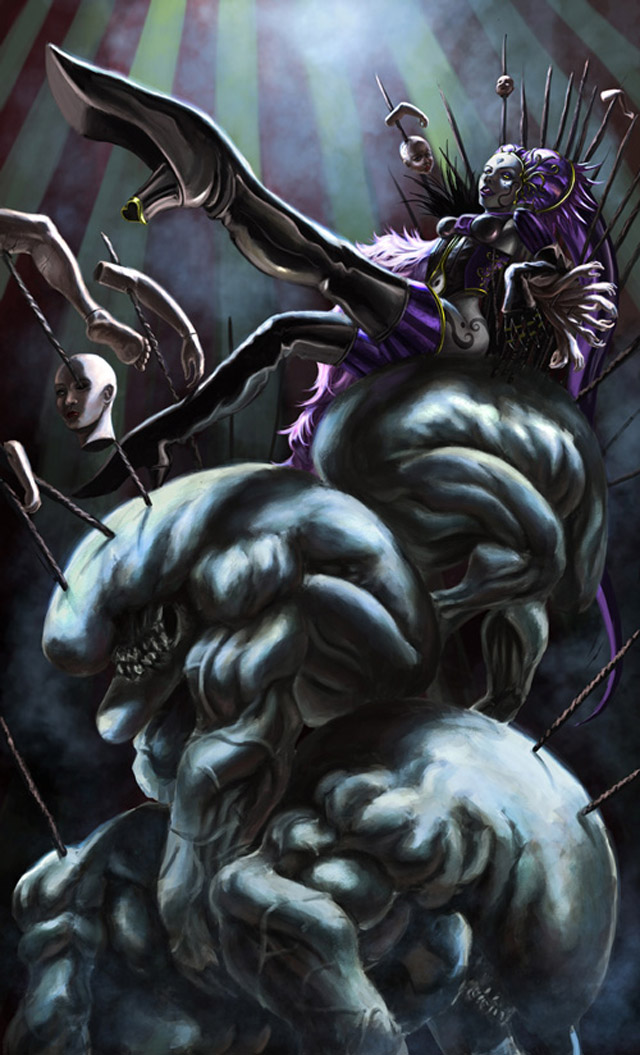 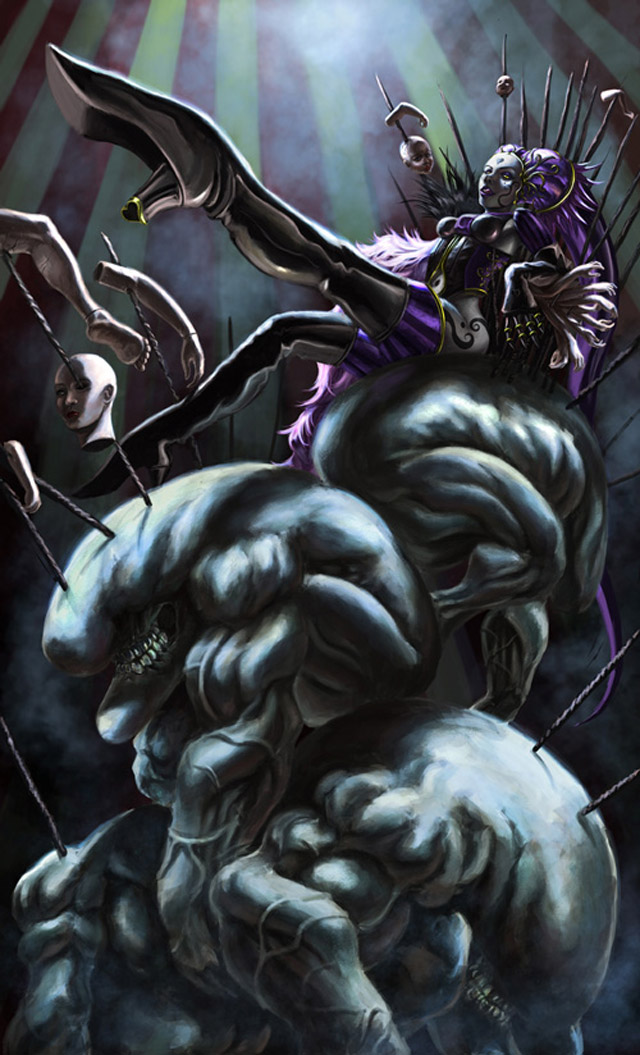 It may not be obvious but this piece was filled with a lot of different details. From the mannequin hands to the parts of the throne behind Zencii that while not being noticeable would stand out if they weren’t shadowed and rendered properly. I spent the majority of my time on this stage actually, because I was going for a very clean style to the finished renders. To get an extra touch of smoothness I used the smudge tool on various parts of the image. Generally I use a low opacity (10-20%) combined with a variety of texture brushes and carefully go over different parts of the image. I say carefully because it’s easy to go overboard with this tool and end up having an image look too murky and soft. The trick is to find that balance of smoothness and texture. It’s also a great tool to use on the end strands of hair. (Which I used on the pink fur)
After an extremely long and agonizing period of tweaking I considered the painting finished and ready for the world to see. Brushes 1,2,3 & 5 courtesy of Good brush 4.0. 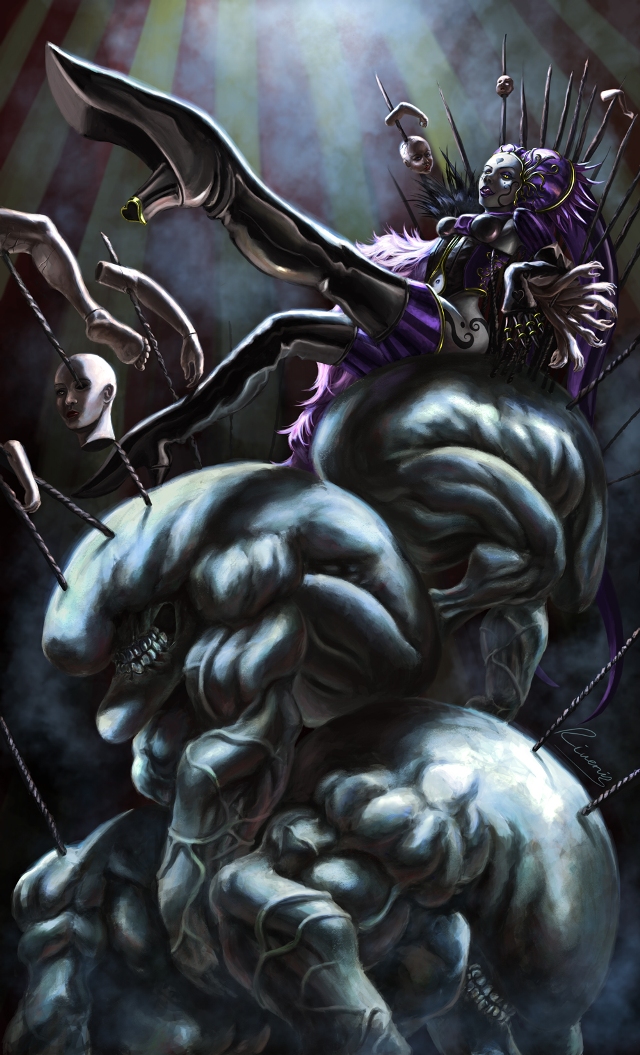