A young man who meets his bot friend…

“THE_MEETING” is a personal work and mostly made for improving my skills and to get a more “illustrational”feeling, compared to my other work. I started this image with no idea what it should be – the only thing I had in mind was that it should have way more details than my other paintings. Well – the goal was set and I made a couple of thumbnail sketches to fnd a interesting idea and composition. Those thumbs are only readable by me – a stroke here and there and that’s all you’ll see. After some sheets of paper later I had the idea of a young man who meets his bot friend. Well time to open up Photoshop.

I’m still a big fan of customized brushes and shapes. Those brushes give me the option to concentrate – in my opinion – on more important things, such as composition, color balance and values. The use of it also speeds up the entire process. All brushes I used for THE MEETING are shown in FIG. A.

Based on my sloppy sketches I started to block in the main colors and shapes by using the “palm” brush and a normal round brush. For the ground I used a huge hard round brush to set the colors and the first “details”! Are made with customized shapes. When you work with customized shapes, Photoshop automatically creates a new layer. With the shapes on the new layer I picked the eraser tool and started to get rid of not necessary areas or parts which have to much details. (Fig. 01) 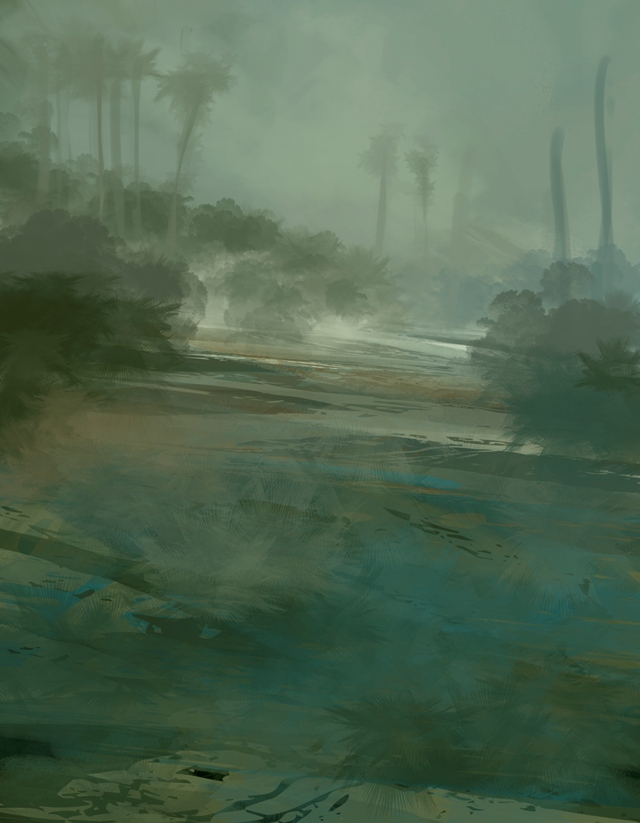 Kind of happy with the initial blocking and look, I merged all layers together. I created a new layer and started to paint in my foreground elements by using the palm brush in a huge size. The brush modifications are set to scatter, size and opacity, which gives a more random look. The same brush is also used for the palm tree tips. Later on I created a new layer and drew in the shape of a river by using the lasso tool. A pretty simple and effective way to draw different shapes and to get some pretty crisp edges as well. When working with the lasso tool I use a lot my P’n’E technique (paint and erase), which means that I block my base color and erase not relevant areas. This will go forth and back until I’m happy with the look. Later on I used a color balance effect to get a more greenish jungle look. (Fig. 02) 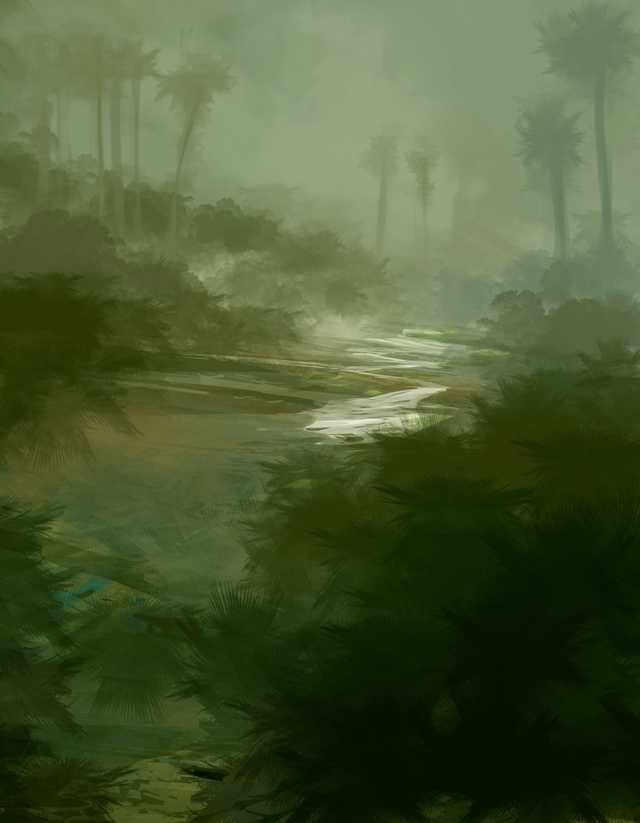 More details are added to the palm trees and I painted in some single leaves on the bushes by using again a customized brush (shown in Fig. A). I realized that the green was to “green” and I used again the color balance effect to add more yellow to the midtone and highlights as well. (Fig. 03) 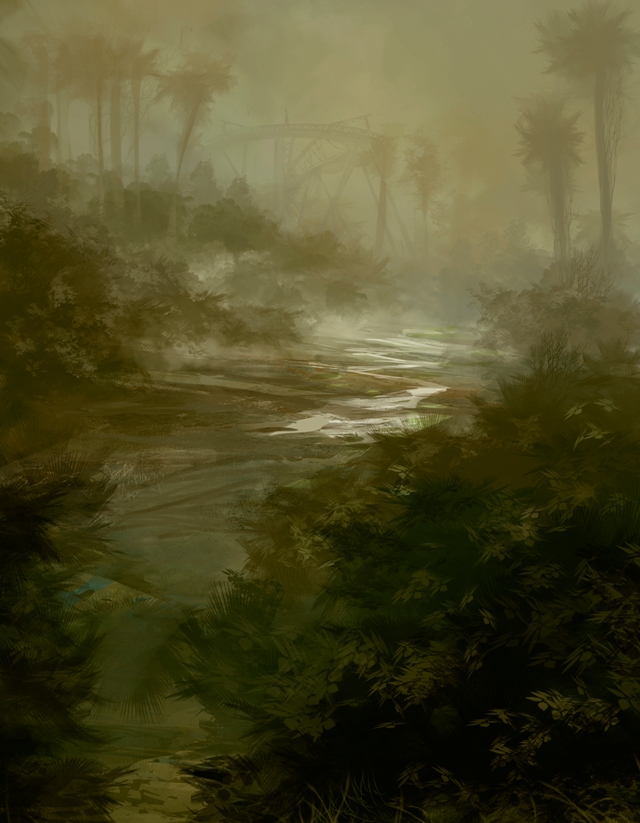 Step 4: DETAILS, DETAILS AND A SUN

The colors after the modifications felt way better and so I kept working on the details. By using my customized cloud brush I painted some fog into the background and the lower areas as well. With a yellowish soft round gradient on a new layer I simulated the foggy sun and de?ned my main light source as well. Later on I painted in some huge technical structure with a special made brush. For the little glow effect on the river I used just the burn tool with a soft round brush – set to roundabout 10% (lights). (Fig. 04) 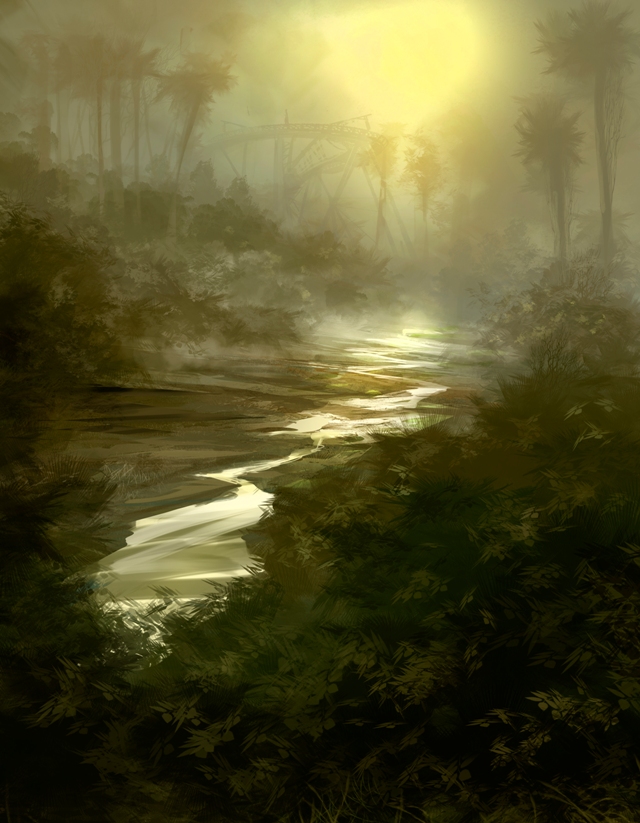 Pretty happy with the actual look, I started to paint in some basic shapes for the young man. When I start to paint a figure I keep my strokes pretty loose and rough. I basically use a hard round brush for the blocking and erase certain areas to get the shape of a head, the upper body, etc. A bright yellowish tone, which was picked from the river (pipette tool), was used to define the frontal lighting for the guy. The highlights are painted with a small hard round brush, set to opacity and the value blending was done by using the smudge tool. (Fig. 05) 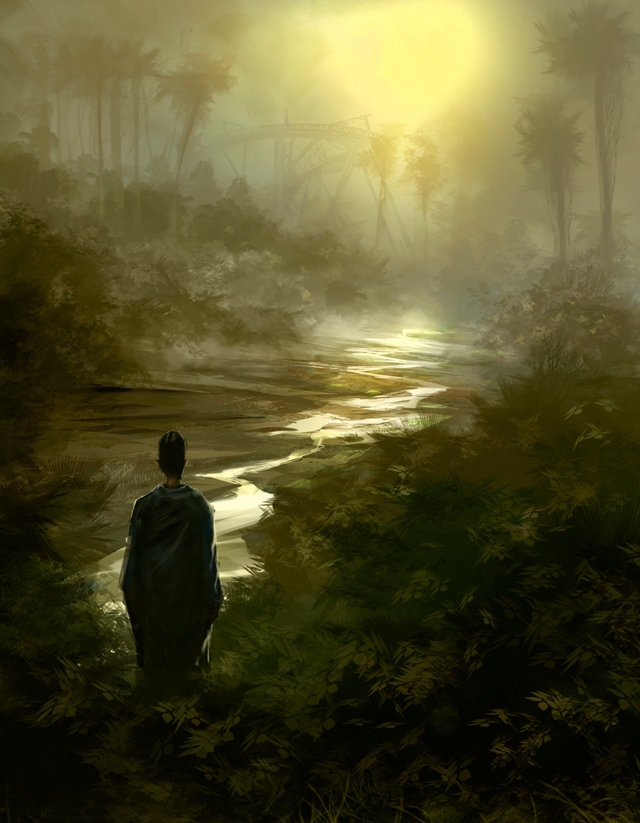 After a break I put my hands again on the background. The huge structure in the background, isn’t ? t anymore and so I decided to get rid of it. By picking color form the closest range and a hard round brush I did a quick paint over. I kept some of the “columns” from the structure as palm trees. (Fig. 06) 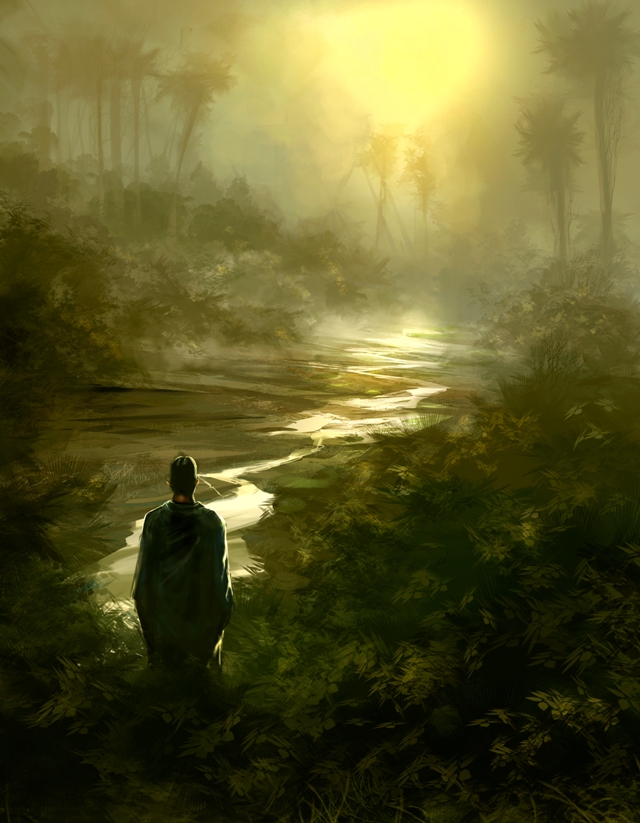 For the bot I used the same technique as described for the young man. Its a simple technique and at the same time a good way to explore things. I’m a big fan of happy accidents. The only thing I had in mind about the bot was the he should have a more bulky shape and feeling. Which will give a nice shape contrast to the more spiky environment and to make him more connected to the roundish shape of the young fellow.(Fig. 07) 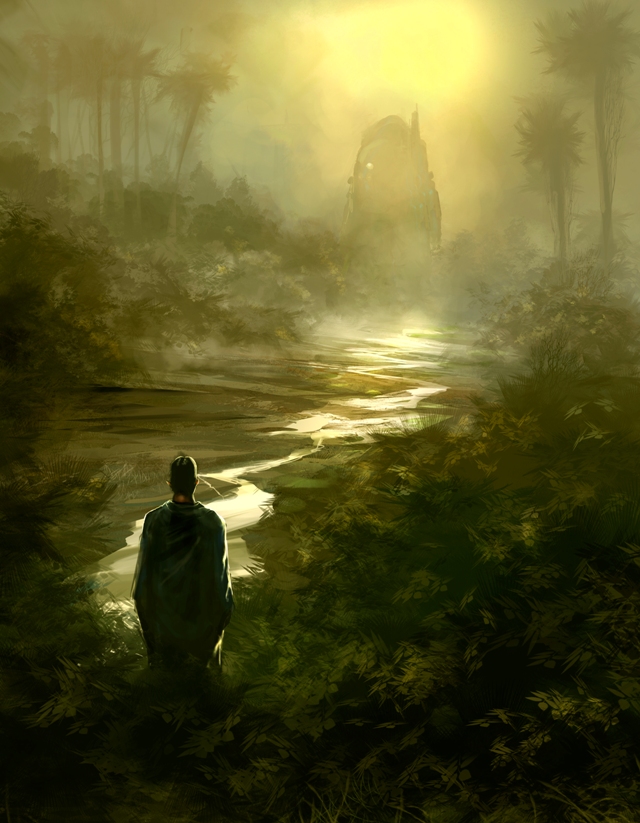 To get a bit more color variety into that image, I created two new layers – both set to soft light. On those two new layers I added a soft round gradient with some pal blue tone. The blueish tone – combined with the overall greenish looks – are responsible for the sort of grey values on the upper right and left corners. In my opinion is really important to have a good understanding for light and especially for color theory. Happy with the actual mood and color variety I got back to the robot. Using a new layer and a hard round brush, I started to define the shape of the robot and added some “technical” details to the bot as well. To connect those two important elements more closely, I painted in a floodlight to the head of the robot. With the rim light on the young dude and the floodlight from the bot you’ll start to connect both elements together. Finally I painted in some bright leaves for a better contrast on the dark areas – just by using my Leaf-brush.(Fig. 08)

Thanks for watching this Making Of and I really hope that it will be a bit of help.